The emergence of Pentecostal Church, as legend has it, is associated with the phenomenon called the Descent of the Holy Spirit after which believers started to speak in tongues (Glossolalia). This echoes with a New Testament story which tells that on the 50th day of Easter, disciples of the Christ suddenly began to speak in different tongues and preach the word of god. The Pentecostal movement originated in Topeka, Kansas, on the night of 1 January 1901. The story is that Charles Fox Parham, a preacher at the Methodist Church, instructed 34 students of the Bible College in Topeka to pray and ruminate on Acts of the Disciples. The first college student to receive Spirit baptism and to start speaking in an unknown tongue was Agnes N. Ozman. In the next few days, other students revealed the same ability. Parham and his students started to preach in different states of the USA. However, it was not until 1906 that the movement’s first stable base was founded in Los Angeles by William Joseph Seymour, one of Parham’s students. From the outset, the Pentecostal Church was distinguished for its racial equality as it represented a mix of “holiness movement” of American Methodist Church of white people and the African American Christianity. The fight against racial inequality became a permanent activity of the church in Los Angeles. The religious teaching was soon spread from the US to Europe by Thomas Ball Barratt, a pastor from England who during his tour of the United States attended a Pentecostal service and became the follower of the church. Barrat founded the Philadelphia Church in Norway and from this church the Pentecostal teaching spread to the rest of Europe. Swedish Pentecostal missionaries were especially active in this endeavor. Today, Pentecostalism counts more than 270 million followers across the world.

Establishment of Religious Organization of Pentecostals in Georgia and Soviet Persecution

The Pentecostal Church traces its history back to the Swedish Mission operating in the Caucasus in the second half of the 19th century, and its founder Niels Frederik Hoyer. In 1882, Hoyer was sent to the Caucasus to evaluate a possibility of launching a missionary activity there. However, the first Pentecostal missionary, officially acknowledged as such, was Andrew David Urshan. Urshan arrived in Georgia from Iran. He is believed to found Pentecostal churches in Tiflis, Armavir and Petrograd. The spread of Pentecostalism beyond Tbilisi to the regions of Georgia can be largely attributed to Pentecostal communities who fled the famine in Ukraine in 1929 and settled in Poti, Batumi, Senaki, Ozurgeti and nearby villages.

The Pentecostals went through much hardships in the Soviet Georgia. They suffered the first mass repression in 1932, when 300 Pentecostals were taken from the seaport of Poti to an unknown destination. No one was able to find out what happened to those people. Members of the Pentecostal Church were continuously and repeatedly persecuted. In the Soviet Georgia, Pentecostals, alike people of other/different beliefs, were subjected to strict control from security services, on the one hand, and trustees of the Council for Religious Affairs, on the other hand. The security services were busy identifying believers and infiltrating religious groups to obtain information about their attitudes. Trustees of the Council for Religious Affairs acted in coordination with the security services. The reports of trustees contained a detailed account of activities of various religious organizations, including the Pentecostals, and provided the data on the changes in the number of followers and the financial state of organizations. One can hardly believe that trustees of the Council for Religious Affairs were able to obtain such information without collaborating with spy networks of security services.

The registration of religious associations was a task of executive committees of various territorial units of the Soviet Union. A positive recommendation from the Council for Religious Affairs was a prerequisite for the registration of a religious association. Pentecostals living in different settlements of Georgia remained largely unregistered and consequently, deprived of even a nominal right to have a place of worship. Groups of Pentecostals were often denied the registration because of their refusal to cooperate with the Soviet authorities. The Pentecostals refused to do a compulsory military service in the Soviet army. Today, however, Pentecostals of the conscription age serve in the armed forces of Georgia. The refusal to serve in the Soviet army was not a pacifist gesture on the part of Pentecostals but a clear manifestation of their defiance of the Soviet system. Despite the persecution, Pentecostals managed to gain followers across Georgia. Owing to the missionary activity at those times, groups of Pentecostals were formed in virtually all large settlements in Abkhazia, also in Gori, Tskhinvali and nearby villages, Rustavi, Chiatura as well as other villages and cities. The resettlement of members of this church from Ukraine to Georgia also contributed to the increase in followers. Moreover, Ukrainian presbyters often conducted religious service. 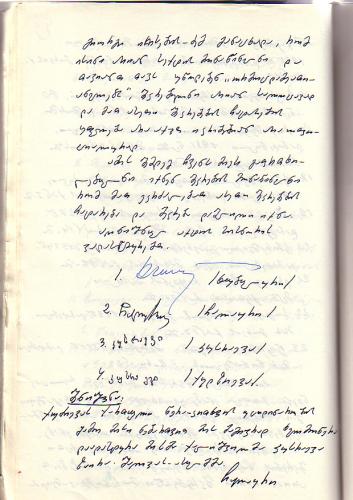 Structure and Charity of Pentecostal Church of Georgia

There are several religious groups of Pentecostals in Georgia. The largest organization of them is the Evangelical Faith Church which was registered under this name in 2013. Ordained bishops supervise the Pentecostal groups operating across Georgia. These bishops, along with the general bishop, comprise a spiritual council, the highest supervisory body of the church. The administrative center of the organization is headquartered in Tbilisi.

The Evangelical Faith Church tries not to limit its activity to religious service but provides social services too. In 2000, the religious association established the Bible College which is open to anyone who wants to study. There is a training center for church presbyters, providing training not only to Pentecostals willing to conduct religious service in Georgia but also to citizens of other countries. The church tries to establish similar educational centers at local churches in other cities too. Magazines and newspapers are published periodically as well as various theological literature. The church views charity as an essential element of its activity and regularly participates in charity events of one-off or repeated nature. The main areas of charity are:

For these and other charitable aims, the religious association ran a soup kitchen in 1991-1996 while after its closure, assisted citizens with products from 1996 to 2006. This kind of assistance is provided to some 120 families in Gardabani and Tbilisi to date. The church regularly supplied various items to the Kutaisi institution for elderly people and patients at the oncological hospital and a dispensary for tuberculosis and lung diseases. Women’s Association of the church provides aid to 15 single mothers, helping them overcome social problems and funding a foreign language learning course of their children. The church has repeatedly participated in charity events that have been launched to alleviate consequences of tragic events in the country. For example, the church provided financial aid to persons poisoned by gas on the Rustaveli Avenue during the rally on 9 April 1989; in cooperation with the Office of Public Defender, assisted families affected by the flood in 2005. It provided humanitarian aid to citizens in Adjara, who were affected by a natural disaster in 2005. During and after the 2008 war, the Evangelical Faith Church of Georgia provided aid to conflict affected and internally displaced persons. The church set up mobile groups who supplied products and other essentials to these people. The Evangelical Faith Church plans to conduct wider-scale charity actions in the future.

The Evangelical Faith Church faces numerous hurdles in Georgia. The state has not recognized the damage suffered by the religious association under the Soviet regime. Therefore, the church cannot receive material compensation due to the religious associations having with this status. Representatives of the church complain about negative stereotypes existing in the society. They are often branded as sectarians. Their different religious practice is viewed as incompatible with the Georgian identity. Students often experience discrimination and unequal treatment in public schools.

The religious association is not allowed to hold events in public space. For example, in June 2014, the church played host to the Festival of Hope, an international event of Christian-evangelical associations. Organizers of the festival took preparations for this day during a year. They entered into a contract on the provision of venue with the administration of Sports Palace and paid the service fee well before the event. However, the Orthodox clergy and various groups of society voiced their protest against the festival.

Three days before the opening ceremony of the event, the roof of one of the wings of Sports Palace caught fire. The fire was extinguished quite soon. The director of the Sports Palace informed the organizers that the event cannot be held in the building for security considerations. The organizers were even denied to conduct an independent expertise to assess the results of the fire and security conditions. Given that the scale of fire was insignificant and that organizers, representatives of the Public Defender’s Office and nongovernmental organizations were allowed to freely enter the building, such attitude of the administration heightened doubts that barriers were artificially erected to thwart the event.

Therefore, the Evangelical Faith Church of Georgia decided to find an alternative space for the festival. It applied to all large facilities in Tbilisi with the request to provide a venue for the event but none of them agreed. At the end of the day, organizers had no other option but to hold the festival in the yard of the Evangelical Faith Church, which was too tight a space for participants from 150 Christian denominations and numerous guests.

Similar problems and unequal treatment often make representatives of the Church feel that they are regarded as second-rate citizens because their faith differs from that of the majority of population.

This article was made possible by the generous support of the American People through The United States Agency for International Development (USAID). The content of this article is the responsibility of TDI and the author and does not necessarily reflect the views of East West Management Institute, USAID or United States Government.

The project is implemented by the Tolerance and Diversity Institute within the framework of USAID program, Promoting Rule of Law in Georgia (PROLoG), carried out by the East-West Management Institute (EWMI).