Georgia: Orthodoxy in the Classroom

Georgia's liberal politicians say only alignment with Europe and the US will allow the country to overcome its post-Soviet past and survive as an independent nation. But is the country's anti-Western and increasingly influential Orthodox Church using schools to breed a generation of religious conservatives whose beliefs are more aligned with Vladimir Putin's Russia than the West?

When 14-year-old Giorgi came home from school on 16 October 2014 in Tbilisi, Georgia, his older brother Dato knew immediately something was wrong. Bruised and battered, Giorgi described how four older boys took turns kicking him in front of other schoolmates. "This wasn't just a boys' fight," Dato says.

Giorgi was beaten because he had called himself an atheist.

Rights groups say this is just one example of growing religious intolerance in Georgia's state schools, fostered by what they say is a campaign of indoctrination encouraged by the country's Orthodox Church.

"They told me: 'You offend our religion, you are an infidel,'" Giorgi says. The school principal confirmed the story, but said the issue has been resolved.

But the brothers, who didn't want their last name used, say the intimidation has continued, and they are angry the perpetrators have not been punished. The only alternative school is private, they say, and their parents can't afford it.

Dato's atheism puts him in a minority in Georgia. More than 80% of Georgians call themselves Orthodox, with the young among the most religious.

But the church's conservative message is increasingly at odds with the country's liberal, pro-Western direction, which paradoxically most Georgians also support.

Schools have become an ideological battleground. 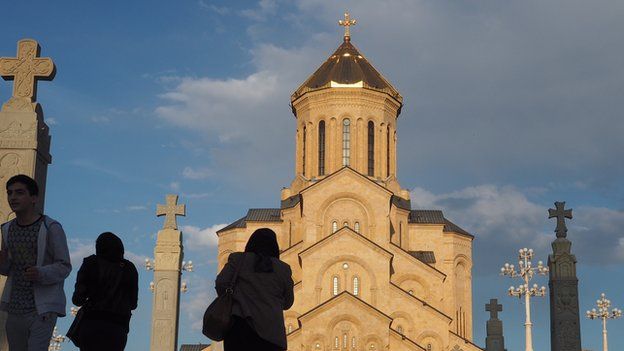 The resurgence of the Orthodox Church began in the early 1990s, when religion filled the ideological vacuum left by the USSR's collapse. Its radicalisation - in part at least - is a reaction to the aggressive pro-Western reforms of the previous government of Mikheil Saakashvili.

His attempts to take religion out of public education caused a huge backlash. The 2005 government ban on religious symbols in schools galvanised grassroots Orthodox groups.

The largest was the Orthodox Parents' Union (OPU), an umbrella group for parents and priests, which became notorious for its aggressive, often violent demonstrations against minorities.

OPU leaders urged parents to ban Harry Potter because it was "satanic", raided Halloween celebrations and lobbied against education reform. The OPU leader turned down the BBC's repeated interview requests because he said in an email it "will twist the truth".

In 2012 Saakashvili's government lost the election to the more traditionalist "Georgian Dream" coalition, which was enthusiastically backed by the church and grassroots Orthodox groups.

Since then, "collective prayers, preaching and indoctrination in public schools have been on the rise," says Eka Chitanava from Georgia's Tolerance and Diversity Institute, which recently conducted a survey of 33 religious minorities. All said their children are facing pressure at school, especially Muslims and Jehovah's Witnesses. 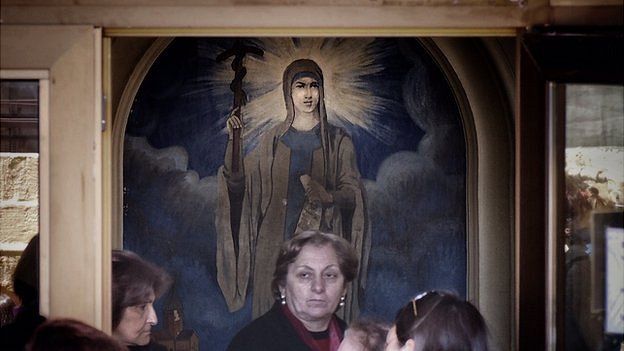 Religious icons and Orthodox paraphernalia are prominently displayed in many schools

The education ministry has publicly dismissed these concerns as "individual incidents". The government says it promotes greater tolerance of different faiths through its newly created Agency for Religious Affairs. Its head Zaza Vashakmadze proudly showed me an agency calendar listing holidays from all the main religious groups.

But icons and Orthodox paraphernalia were prominently displayed in all the schools we visited.

In school number two in the village of Terjola, the principal told me she often brought in the priest to "work with children" and that it was her "dream" to have a prayer room.

She said she was proud to help a local priest organise a demonstration against a local Jehovah's Witness community's plans for a temple. "How could I allow this to be built? Children will walk past it on the way to school and we all know how easy it is to tempt a child," she said.

On her desk was a large photograph of Patriarch Ilia II, the head of Georgia's Orthodox Church and the country's most popular public figure. It is his ultra-conservative message - in one sermon the Patriarch said women must wash their husbands' feet - that is being magnified by activists and priests across the country. 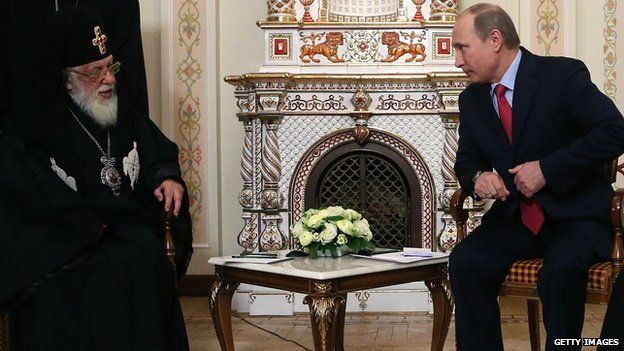 One of them is Father Iotame, who fills a small church outside the capital. After his sermon, I ask him what he considers the biggest threat facing Georgia. He doesn't blink. "Gays." In fact he uses a much ruder word. The West, he says, is spreading homosexuality and paedophilia.

Across the former Soviet Union, the words "gay" and "LGBT" - an abbreviation for Lesbian, Gay, Bisexual and Transgender - are hate terms often used to describe any Western-leaning figure.

"Did you know that paedophile parties have now come to power in Europe?" Father Iotame asked.

In 2013, he was one of several dozen priests who took their campaign to the streets. Armed with sticks and crucifixes, they attacked a small rally against homophobia and left dozens injured. 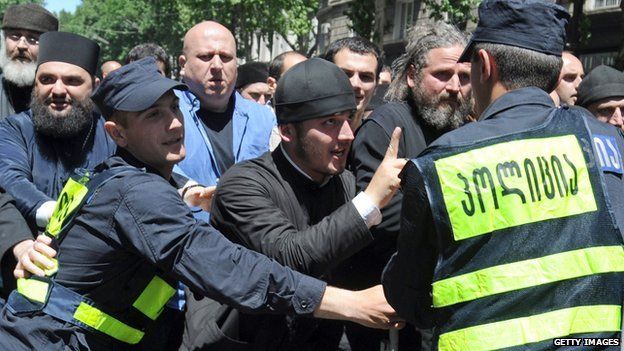 Orthodoxy is the cornerstone of Putin's resurgent Russia, and gays are considered its biggest enemies.

"For Putin gays are the new Jews," says Vacharadze. "Much the same way that Hitler found the Jews to be an impediment to the happiness of the German nation, Putin has found a way to equate homosexuality with the West."

The strategy has worked in Russia and in Eastern Ukraine, where pro-Russian rebels say they are fighting for Orthodox beliefs and against what they call corrupting Western values like homosexuality.

And Vacharadze believes Moscow is using the church to spread the same anti-Western message in Georgia.

The Georgian Orthodox Church denies being an instrument of Russia, saying the links are historical.

But it cites modern religious Russian literature in its teachings, and Father Iotame told me visiting Russian priests started organising annual religious "boot camps" in Georgia three years ago - where he learned about "paedophile parties taking over Europe". He wants to save the young from "a wave of filth" from the West.

In weekly sermons, hundreds of priests are delivering the same message: Georgia's Western aspirations are no longer compatible with its ancient Orthodox faith. And they are telling Georgia's young people they have to make a choice.

You can listen to the full radio program here:

"there're frequent cases of collective prayers, indoctrination and preaching at public schools, we interviewed representatives of 33 religious minority organizations and almost all of them say that their children are under pressure at schools".. Eka Chitanava works for Georgia's Tolerance and Diversity Institute, just of one of the groups concerned about growing influence of religion in schools. "Negative attitudes are present especially towards Muslims, Jehovah's witnesses, also representatives of other confessions, but those groups are maybe mostly marginalized, For instance, Muslims are presented often even in textbooks as enemies, conquerors..."