The Armenian Historical Church located at Aghmashenebeli str. N38, in Tbilisi was registered as the property of the Patriarchate of Georgia on July 28, 2017 by the State, without the submission of any document establishing the right to the ownership of the Patriarchate. The church which is the monument of cultural heritage is currently a subject to illegal alterations that significantly damage the building and pose risks to its historical, confessional and architectural characteristics.

The pictures taken on March 26, 2018, show that the condition of the monument, as it was when transferred to the Patriarchate, has been modified and has been substantially damaged. In particular, the fronton (part of the façade of the building) is broken down, and the walls of the church, which were previously uneven due to the natural wear, are now even. 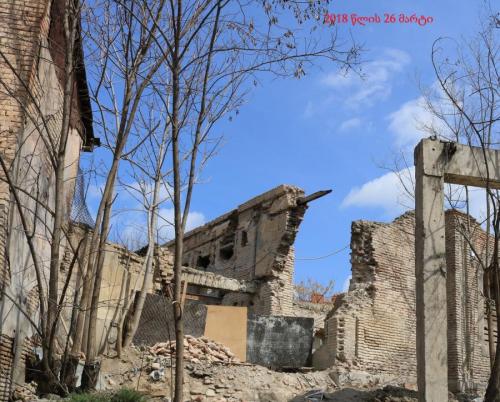 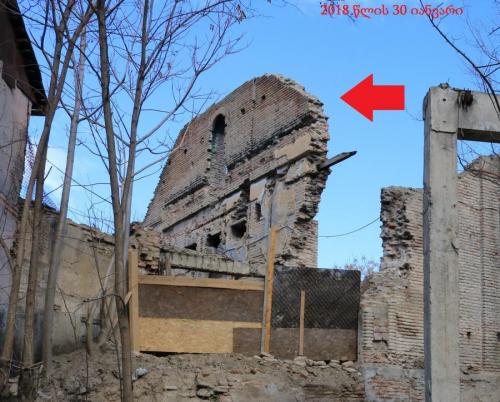 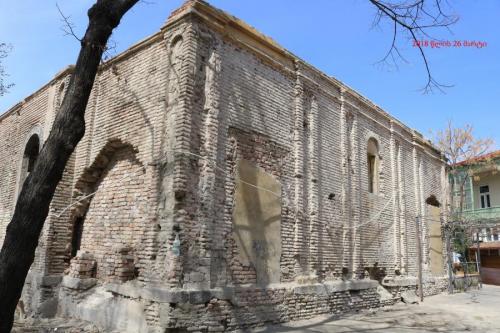 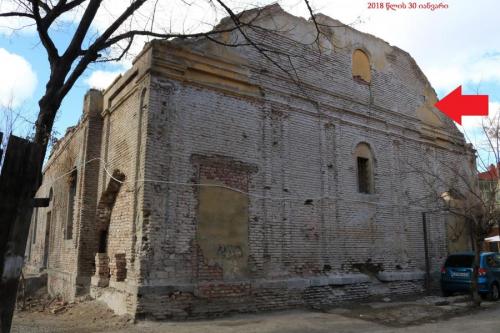 The fact that the damage is not accidental and that the Georgian Patriarchate intentionally causes the damage is confirmed by the draft church restoration-reconstruction project submitted to the Cultural Heritage Protection Agency by the Patriarchate. According to the project, the substantial alternations of the appearance of the monument are part of the plan, including the transformation of the current single roof covering into the three-dimensional basilica. 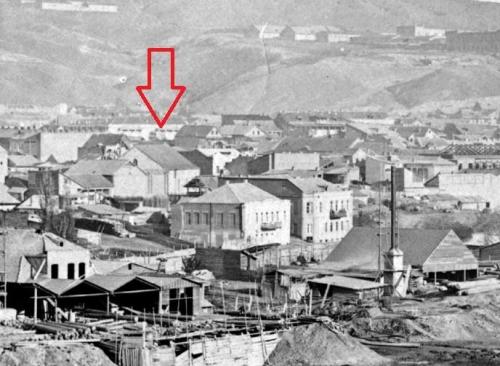 Pic. 1 The photo depicting the single-aisle covering of the church. 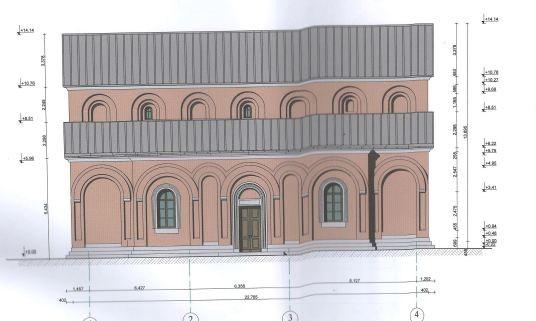 Pic. 2 The façade according to the project prepared by the Patriarchate.

It is noteworthy that, according to the draft project presented to the agency for the purpose of building the three-aisled basilica, the plan involved the removal of the existing fronton. This confirms the fact that the Patriarchate, in order to build a new church is damaging the monument and changing its appearance. 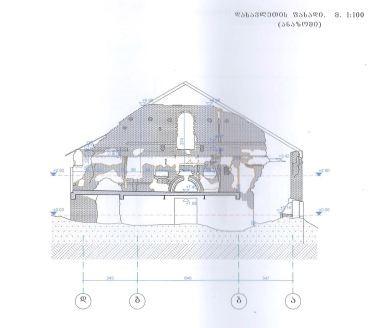 Pic. 3 West-measured façade of the exiting fronton as of November, 2017 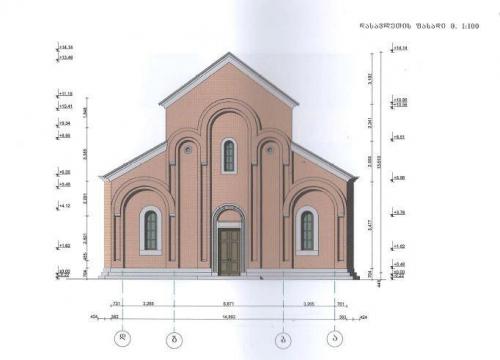 Pic. 4. The draft design project by the Patriarchate - the western façade.

According to the information provided by the National Agency for Cultural Heritage Preservation of Georgia [1], the Georgian Patriarchate does not have any kind of construction work permit for the monument. The permit has been issued in its name only for the purpose of research to be performed from December 13, 2017, to March 30, 2018. It is noteworthy that the Georgian Diocese of the Armenian Apostolic Orthodox Church is disputing the legitimacy of the research permit which the agency issued without any project design documentation required by the law.

According to Article 25 (1) (a) of the Law of Georgia on Cultural Heritage, research works are of scientific and practical nature. Their goal is to find information related to the monument to determine its condition and current damage and to identify the causes of the damage, as well as, to prepare recommendations on rehabilitation measures. However, within the mentioned permit, the Patriarchate went beyond the scope of research activities and purpose. To this day, the cleaning, archaeological and deconstruction works have been performed which is illegal. Moreover, the above mentioned activities include signs of cultural crime as defined by Article 259(2) of the Criminal Code of Georgia (intentionally damaging the cultural heritage monument or other cultural heritage protected by the Georgian legislation [2]). Consequently, it is crucial that the State immediately suspends the process of illegal and arbitrary influence and destruction of the cultural monument.

In the Tandoyants Church case, the decision on the illegal transfer of the historical Armenian Church to the Patriarchate, as well as, the process of eradication of the representation and authenticity of the monument, contradicts the interests of protecting cultural diversity of the city and its authentic cultural and social environment. The process, at the same time, represents the case of the collective memory eradication of ethnic Armenians living in Georgia and repression of their history. The existing practice of not protecting or destroying historical monuments of ethnic and religious minorities, as well as transferring these properties to the dominant religious organization is a demonstration of institutionalized xenophobia which contradicts the integration policy based on the anti-discrimination and civic equality as declared by the Government of Georgia.

Based on the above mentioned, we address:

The Ministry of Culture and Sports of Georgia

The National Agency for Cultural Heritage Preservation of Georgia

•    To take immediate measures and prevent unlawful physical impact on the church which has the status of cultural heritage and is located at Aghmashenebeli Ave. N38 in Tbilisi;

•    In view of the particular public interest, ensure the proactive spread of information about the assessments and activities related to the current state of events related to the mentioned church.

The Ministry of Internal Affairs of Georgia:

•    On the basis of Article 259(2) of the Criminal Code, to ensure timely and effective investigation of the facts of deliberate damage to the cultural heritage, including identification of possible discrimination motives and timely prevention of violation.