On March 29, 2016, Tolerance and Diversity Institute (TDI) held a briefing, where former Sheikh of the Administration of Muslims of all Georgia (AMAG), Vagif Akperov, along with TDI representatives talked about alleged criminal offences committed against him and facts of violation of his fundamental rights and freedoms. 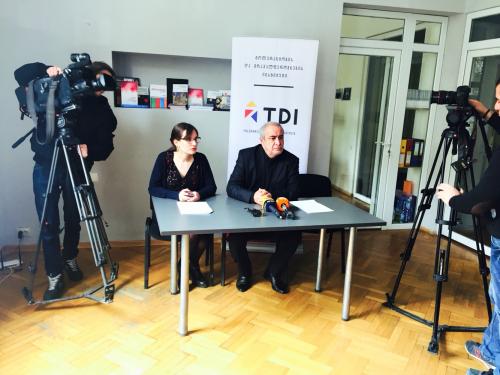 Change of the government and pressure imposed on Sheikh Vagif Akperov by law enforcement bodies for his resignation.

For many years Vagif Akperov has been active in public life. He is a clergyman since 1996; as of today he is actively involved in interreligious dialogues of different format and openly opposes any violence in the name of religion. Since 2011, Vagif Akperov is fulfilling his obligations of a Sheikh in good faith (no discipline and/or other forms of responsibility have been used against him). However, according to Akperov, since 2012, after the change of the government, political pressure was imposed upon him and facts of the State’s gross interference into the autonomy of the religious organization have been revealed. According to Akperov, he has been asked to cease any involvement in public meetings, conferences and not to communicate with other religious organizations.

Since summer 2013, pressure imposed on Sheikh became more vivid. According to Vagif Akperov, on December 27, 2013, around 6-7 p.m. unknown persons reached him on the phone and informed him that the they were representing the Ministry of Internal Affairs of Georgia and requested him to come to the meeting at 9 p.m. of the same day, at the following address: Tbilisi, Vazha-Pshavela Avenue, so-called “Module Building”.

According to Akperov, during the conversation, he was categorically banned from communicating with press and even was asked to stop visiting the mosque. To the Sheikh’s question - what would be the consequences if he refused to abide by the instructions, the representatives of the Ministry of Internal Affairs, according to Akperov, threatened him with the dissemination of information about his private life and smear his name in the public eye. At the same time, his children were frequently mentioned in the conversation and it was repeatedly indicated that for the sake of his children, it would be better for him to resign and leave the occupied position. This statement was seen by Akperov as veiled threat and he felt danger that in case of resistance, his family would be endangered.

Vagip Akperov, due to the pressure and circumstances he found himself involved in (in “Module” Building, surrounded by law enforcers), was forced to write the resignation letter as it was requested from him.

It is important, that the resignation letter, dictated and written forcibly, was not submitted to anybody by Vagif Akperov and was retained by representatives of the Ministry of Interior Affairs in the “Module” Building.

This very letter appeared at the meeting of Administration of All Muslims of Georgia on January 9, 2014, which was satisfied by the Religious Council chosen that day by the Organization.

Job offer in exchange for silence

After writing the resignation letter forcibly in the “Module” Building, during months of February-March of 2014, unknown persons called Akperov (According to him, representatives of the Ministry of Internal Affairs), summoned him and offered a job at Georgian Oil and Gas Corporation, also the position of the deputy director of Thermal Power Plant (so called “Gardabani Gresi”) located in Gardabani. He was promised to have a solid salary and benefits. Akperov categorically rejected the offered positions.

Constitution of Georgia ensures realization of the principle of secularism. According to the facts stated by Vagif Akperov, it is obvious that the State openly violates the mentioned principle and even more, tries to infringe on freedom of religion, freedom of labor and human dignity. As a result of the mentioned circumstances, Vagif Akperov suffered significant moral damage, also, material damage (due to the resignation and loss of the relevant salary).

According to the article 169 of the Criminal Code of Georgia, free will of a person to make decisions independently, whether he or she wants to write a resignation letter or not, is a value protected under criminal law. Limitation of such will, represents a criminal offence.

Moreover, the above-mentioned facts reveal signs of alleged offences. Namely, it is possible that offences determined under the article 333 of the Criminal Code, covering abuse of authority, and threat - offence indicated in the article 151 of the same Code, were committed.

Political context of the Administration of Muslims of All Georgia (AMAG) and the present case.

Administration of Muslims of All Georgia (AMAG) is a Legal Person of Public Law (since July 15, 2011) that on January 5 of the same year has been registered under the status of non-commercial legal entity. Uniting of the Muslims living in Georgia under one organization, in order to effectively solve any matters related to religion, was named as a purpose of registration of the organization.

On June 12, 2011, joint meeting of the Administration of Muslims of All Georgia (i/c: 401953926) elected Vagif Akperov as a Sheikh. At that time the Administration existed in the form of non-entrepreneurial (non-commercial) legal person.

N(N)LP Administration of Muslims of All Georgia, after changes to the Civil Code, undertook reorganization and since July 15, 2011, became registered as legal entity of public law (LEPL). After reorganization, Vagif Akperov remained as an elected Sheikh of the AMAG.

Regarding the Anti-State Position of Metropolitan Anton